While the city may not be able to take credit as the birthplace of aviation, Canton has assisted in putting Ohio on the map as the aviation capital. The city has seen the aspirations of flying come full circle, with major advances in both ballooning and modern aviation.

Frank was born in Mansfield, Ohio on November 17, 1877. When his father was physically incapacitated the family moved to Canton in 1879. When a doctor's advice his father went to Paris for a spa treatment, Frank Jr. returned with his aunt to Mansfield. Frank jr. attended public school in Mansfield until he joined his father in Paris, where he attended a dominican school.

In 1883 he entered a military school in Michigan. After military school, Frank went to West Point in 1897. After serving in the Philippines, he returned to West Point to teach French. His father in Paris introduced him to ballooning and schooled him well enough that Frank jr. won the first International Balloon contest by successfully crossing the English Channel. His father also introduced his son to the Wright Brothers in 1907 and together they launched a series of balloons each summer in Canton.

Division of the Chief Signal Office

In 1907 he was appointed to the aeronautical Division of the Chief Signal Office in Washington. He tested the Wright plane for the military, flying with Orville in 1909. After training by Orville, Frank flew solo and was sent to Panama to train pilots in the Wright II plane. Frank served the military in Texas, San Diego, and Fort Omaha Nebraska. He served the British and French military ballooning operations and was given the Legion of Merit award, The French Legion of Honor and the Portuguese Order of Avis. He co-authored a book with Colonel deForest Chandler, How our Army Grew Wings. 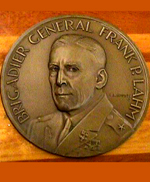 Born in Canton, Ohio the son of Congressman Samuel Lahm, Frank Lahm became interested in aeronautics through the reading of Leonardo DaVinci. He married Adelaide Purdy of Mansfield in 1875. After severe paralysis, he returned in 1880 to Canton with his family. Within a year his wife died and doctors suggested he search for a cure through spa therapy in Europe.

After a year he was able to climb the Matterhorn and he joined the Remington Typewriter Company in Paris as a European sales agent. He alternated venues for fifty years staying in Ohio in the summer months and living in Paris for the rest of the year. He joined the French Aero Club and flew his balloon, Katherine Hamilton, named after his daughter. He was responsible for bringing the Wrights to Paris.

In 1907 Lahm established the Aero Society of Ohio. Flying many different hot air balloon flights from Walnut Avenue and East Tuscarawas, he was accompanied by Orville Wright in one of them. Because of his many flights with Ohio, Canton became internationally famous as a Sports Ballooning Capital of the United States.

In the 1920's Frank organized the Aeronautical Club. His Aero Society successfully launched 30 flights in 1909, including a competition between Ohio and the Skypilot. In 1910 the Society launched 10 more flights. For his work in honoring innovation in French aviation, he was given the Legion of Honor award by the French government. And Time Magazine in 1929 acclaimed him as the first Sports Air Balloonist in the United States. 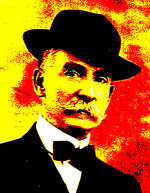 William Martin was born at the site of his father's rope-making business on January 22, 1855. That site is now occupied by the Frank Bow Building, the old post office building on 2nd and Cleveland Southwest in Canton, Ohio. One of William's teachers was Anna McKinley, the President's sister. He was an inventor from early years making a rope spinning machine, and toy planes with rubber band engines.

After marriage, he studied engineering and surveyed. In a debate at Brush College, he argued, that man could fly. In 1900 he demonstrated for the New York Aeronautic Society his rubber band propelled airplane. Martin received a patent on his toy plane in 1908. That same year he designed a full-sized V-shaped wing monoplane with sled runners functional in snow.

Horse driven, the plane flew 200 feet at a height of twenty-five feet. In 1909, his new wife, Almina was the first woman to fly in a heavier than air machine. William made more than 100 successful flights, and financed by William A. Hoberdier, demonstrated his plane successfully at the Hudson-Fulton celebration in New York. The plane in that year was pulled by an automobile. Later the monoplane would occupy a place next to the Lindbergh plane in the Smithsonian.